Tintin i the snaws o tibet

Tintin is hert-sair, thinkin his guid freen Chang has been killed in a plane stramash i the Himalayas. Syne he has a byordinar dream that maks him misdoot that Chang is deid. Thegither wi Captain Haddie an Tarrie, he sets oot on a perilous ploy, traipsin ower the snaw-tooried Himalayas towart Tibet. Upby, the Buddhist monks o an ootland monastery see a veesion — that Chang is aleeve efter aw, ben a cave, upheich i the moontains. But Chang isna on his lee lane. Wi him is a gey rare craitur kent in legends as the ‘Ugsome Snawman’! 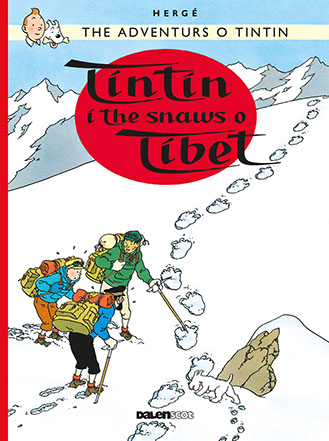 Tell us whaur ye are – we’ll add the relevant

Tintin i the snaws o tibet

Distraught, Tintin believes his friend Chang has been killed in a plane crash in the Himalayas, until he has a strange dream which suggests otherwise. Convinced of Chang’s survival Tintin, Captain Haddie and Tarrie set on an impossible mission, trekking over the snow-capped Himalayan peaks to Tibet. There, the monks of a remote Buddhist monastery have a vision — that Chang is indeed alive, inside a cave, high in the mountains. But Chang isn’t there alone. For company he has and illusive and fabled companion, considered by many to be abominable!